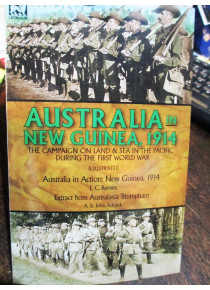 "Australia in New Guinea, 1914 The Campaign on Land & Sea in the Pacific During the First World War" by LC REEVES

This book is a reprint of a rare account of the Australian Naval and Military Expeditionary Force to German New Guinea in 1914.

The book was titled "Australia in Action New Guinea, 1914" by Signaller L C REEVES being first published in 1915 by Australasian News Sydney.
It was one of the first Australian publications about the World War One conflict.
Additionally, included in this book is an extract about the ANMEF from the Australasia Triumphant printed 1916.

A nominal roll is included.

The author Lyle Comyns Reeves was a young NSW Railways clerk who had experience with typing and morse.  On the 11 August 1914, he joined the ANMEF as a signaller. After service in New Guinea, he returned to Australia and by early April 1915 had written and published his book, "Australians In Action". In June 1915, he relisted with the 1st AIF and served on the Western Front with the 20th Battalion.
In between wars, he established a printing and newspaper business in Wyong. In WW2, he become an Officer within the Army's Records Office. After the war he was employed by the Water Board Engineers' Office in Sydney. He died on the 17 March 1958.

His book was the first WW1 account written by an Australian soldier.


Although history is not always kind to remember the Australian action at Rabual it's interesting to reflect a number of other 'firsts' were recorded for World War One.
*First time any Australian or British force fought the Germans on their own Territory.
*The ANMEF secured the 1st surrender of WWI.
*The Naval Men conducted the 1st bayonet charge of WWI.
* The first decorations of WWI were awarded for action at Rabual.