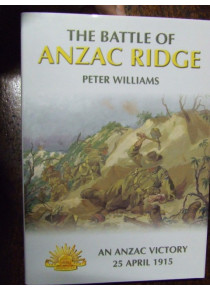 The Battle of ANZAC Ridge - An Anzac Victory 25th April 1915 by P. Williams

This military book is a detailed study of the Battle of Anzac that occurred directly after the landing. We have always heard of the Australians defeat at Gallipoli. This book challenges that there was at least a substantial ANZAC Victory on 25 April 1915.

The book puts forward the compelling point that a significant victory was won by the Australians and New Zealanders on the first day of the Gallipoli Campaign. Its subject is not the landing at Anzac Cove but the battle fought later that day, between the Australian & New Zealand Army Corps and III Ottoman Corps.

This battle was fought in the rough ravines and hills of the Anzac Ridge. Many of our cherished myths are challenged and various new insights are offered.