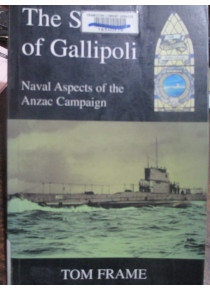 $19.00
The Shores of Gallipoli Naval Aspects of the Anzac Campaign by Tom Frame

Few people realise that the Royal Australian Navy played a crucial part in the Gallipoli campaign, a tragic operation which cost 8,000 Australian lives. Australia's best known naval historian, Dr. Tom Frame, describes the outstanding achievement of the submarine AE2, the first Allied submarine to penetrate the Dardanelles, and the heroic work of the RAN Bridging Train.

He also reveals how the sunken AE2 was discovered by a joint Australian-Turkish diving team in 1998. Most striking is his argument that professional bravado, poor navigation and inaccurate charts resulted in the Anzacs being put on the 'wrong' beach, rather than an alleged tidal current. Based on original research and the author's personal knowledge of the Gallipoli Peninsula and the north-east Aegean Sea, this compelling account makes a major contribution to Gallipoli history.