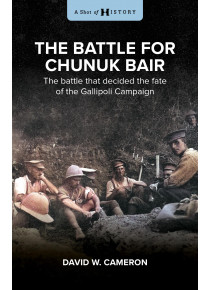 $29.00
The Battle for Chunuk Bair A Shot of History by D Cameron

The August Offensive or ‘Anzac Breakout’ at Gallipoli was an attempt to break the stalemate of the campaign. It saw some of the bloodiest fighting since the landing as Commonwealth and Turkish troops fought desperate battles at Lone Pine, German Officers’ Trench, Turkish Quinn’s, The Chessboard, The Nek, Chunuk Bair, The Farm, Hill Q and Hill 971.

The offensive was designed to allow the allied forces to ‘break out’ of the Anzac beachhead below the Sari Bair Range. The capture of Chunuk Bair, the secondary peak of the Sari Bair range, was one of two objectives to capture. Sever fighting took place across appalling and complex terrain. It was a costly battle however the Anzacs secured their objective.

The capture of Chunuk Bair by the Anzacs was the only success for the Allies of the campaign, but it did not last the position was untenable and the Ottomans recaptured the peak a few days later.

The Battle for Chunuk Bair, was one that decided the fate of the Gallipoli Campaign.