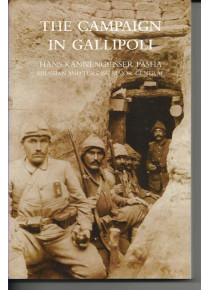 CAMPAIGN GALLIPOLI 1915 Story from Turkish side, through Turkish eyes

CAMPAIGN IN GALLIPOLI ' by Hans Kannengiesser﻿

CAMPAIGN IN GALLIPOLI ' by Hans Kannengiesser Pasha (Prussian
Turkish Major-General). The story of Gallipoli told from the other side of
the hill, through Turkish eyes.
Author Hans Kannengiesser was a German General commanding the 9th
Turkish division in the Fifth Army of General Liman von Sanders. A rare and
absorbing account of the bloody campaign.Turkey was closely allied with Germany
before and during the Great War. The Kaiser supplied some of his best military
brains - led by Liman von Sanders - as advisers to the Turkish army. Gallipoli
is a well-covered campaign, but accounts from &quot;the other side are
rare, making this book even more important. Kannengiesser was more than a mere
liaison officer with the Turkish army - like Von Sanders, who commanded the
Turkish Fifth Army, he actually commanded Turkish troops in action, holding
the Turkish rank of Pasha - roughly equivalent to Marshal - and leading the
9th Division of Sanders' army. Kannengiesser tells the story of the Gallipoli
campaign from the Turkish side, paying tribute both to the courage of his own
men and that of their British and Anzac enemies.