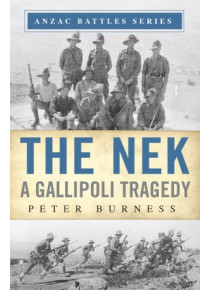 The Nek a Gallipoli Tragedy by P.Burness : new book

This Gallipoli war book is a new updated edition of the Book 1st printed 1996 titled ' The Nek The Tragic Charge of the Light Horse at Gallipoli ' by the
same Author Peter Burness. The charge was undertaken by the 8th Light Horse Regiment and 10th Light Horse Regiment ALH.
That 1996 1st edition book has been highly sought after for many years on the second hand book market. This updated book likewise will be very popular with military book collectors, family historians, battle and medal researchers.
For this new edition, the author has updated the text to include new information that has come to light since the book was first published in 1996. New maps and photographs are also included.
The Author, Peter Burness is a senior historian at the Australian War Memorial. He joined the AWM in 1973 as a curator, and is now its longest serving employee. He is a highly respected World War One military Historian. He has had a long-held interest in the events that happened during the Charge at the Nek Gallipoli. Way back in 1984, he had the unique privilege to interview veterans who had been at The Nek on the very day of the tragic charge in August 1915. These veterans included Lionel Simpson DCM who was the last living survivor of the Charge.
We thank Peter for once again making this valuable book available to people.
The Charge at The Nek was immortalised when Peter Weir made his 1981 movie, Gallipoli which portrayed the Charge at the Nek as climax to the movie starring Mel Gibson . Although some historical details were inaccurately depicted in the movie it has created a huge interest in the Gallipoli Battle.
See these Other Books related to the 10th Light Horse

Gallipoli to Tripoli History of the 10th Light Horse Regiment AIF
The Price of Valour The Triumph and Tragedy of a Gallipoli Hero, Hugo Throssell, VC

Short History Charge at the NEK
The reason for the charge was to divert the Turkish army away from New Zealand troops who were making an attack on Chunuk Bair - high ground further to the north. There was to be several of these Feint attacks on the 7th August ( Attack at Quinns, Pope against the Chessboard, German Officers Trench.). However, this is the charge which has been immortalised in the Peter Weir film called "Gallipoli"starring Mel Gibson.

The Charge was to take place at dawn 4.30 am on the 7th August 1915. First to charge were the 8th Lighthorse Regiment (LHR) from Victoria followed by the 10th LHR from Western Australia. The order advised that this was a bayonet charge only. The troops would carry 200 rounds but no rounds would be loaded on the charge. This madness was used so that troops would rush forward with no pausing to fire rifles. Commanding the 8th LHR was Lieutenant-Colonel Alexander White from Ballarat in Victoria.

All during the night the Turkish Trenches at The Nek were subjected to Allied artillery. At 4.00am an intensive bombardment from Allied land artillery was also accompanied by firing from Warships. Australian Historian, Charles Bean wrote, "for some reason which will probably never be explained. The bombardment which was then thundering upon the enemy ended -seven minutes before the watches at The Nek pointed to 4.30am. The orders to the artillery were clear - that the guns were to continue until 4.30am. The evidence thus points to some mistake in timing of watches."

It was then thought by Lieutenant-Colonel Alexander White that the artillery would resume with a heavy burst to finish but this was not to happen. During those vital seven minutes the Turks took to the parapet to make ready their machine guns. Lieutenant-Colonel Alexander White would lead the 150 young Victorians of the first wave into the change.

At 4.30am Lieutenant-Colonel Alexander White yelled the order "GO!" Of this moment Australian historian Charles Bean wrote," I shall never forget that moment. I was making my way along a path from the left of the area and was passing not very far away when tremendous fusillade broke out. It rose from a fierce crackle into a roar in which you could distinguish neither rifle or machine gun but just one continuous roaring tempest. One could not help an involuntary shiver - God help anyone that was out in that tornado"

Witnesses saw the Australian line start forward then suddenly go limp and sink to the ground,"as though the men's limbs had become string". Many troops did not even clear the parapet, just being hit and falling back into the trench.

Lieutenant-Colonel Alexander White had gone ten paces before falling dead. As soon as the first line had cleared the second line of a further 150 souls took their place in the trench. Of course, the second line knew exactly what was in store for them as they were seeing the horrible results of war all round them in the trench.There was now no Commander left to question whether the attack should continue - Lieutenant-Colonel White had died in the first wave. Exactly two minutes after the first line the order for the second line to go over the top was given. Without hesitation every man in the second line leapt forward to meet the same fate. Bean wrote in the Official History "about this time observing officers are said to have seen the small Australian red and yellow marker flags were put up in the enemy's front line." Who placed them will never be known. It is conjecture if any Australian ever made it to the Turkish trench - alive.

The 10th LHR had taken their place in the trench. Major Todd who commanded the third line 10th LHR reported to the Regimental Commander Colonel Brazier, that success of the Charge was impossible. Brazier agreed that annihilation of the 10th LHR could serve no purpose. At 4.40am Colonel Brazier went to Brigade HQ which was slightly to the rear. There he found Colonel Anthill Brigade-Major. Colonel Brazier informed Anthill of his observations but Anthill had already received news of the marker flags in the enemy trench. Anthill concluded that it was important to support those troops in the trench. Therefore, the 10th LHR was to "PUSH ON" at once. At 4.45am the third line of attack but the first line of the 10th LHR went forward to meet death instantly. Major Scott of the fourth line reported to Brazier as Major Todd had done before him that the task could not be achieved. Once again Brazier referred back to Anthill but was once again told to advance. This time Brazier personally sought confirmation from General Hughes. Hughes was in favour of stopping further charges across The Nek. One account has it that Brazier told Hughes that " the whole thing is nothing but bloody murder." However, while this was being debated the right of the fourth line charged without being directed so by Major Scott. The rest of the line then advanced.

The 8th LHR out of 300 men committed to the attack lost 154 killed 80 wounded. The 10th LHR 80 killed 58 wounded.
The bodies of these gallant boys would remain in no man's land until finally being buried in 1919.

In the third wave of the 10th LHR it was seen that a young Western Australian Wilfred Harper,"ran forward like a schoolboy in a foot-race with all the speed he could compass"