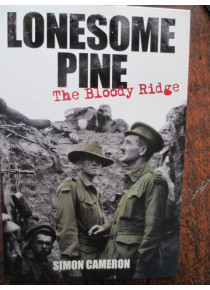 As part of the Gallipoli August Offensives the Australian 4th , 3rd and 2nd Battalion were to attack Turkish positions on the small plateau in Gallipoli known as Lone Pine. The Australians named it after a single pine tree that grew on the plateau thus the title name of this military book 'Lonesome Pine'
The attack was one of the only successful Australian Battles of August 1915.
The history Battle includes the Turkish counter attacks over three days.