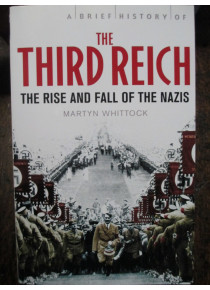 Brief History of the Third Reich By M. Whittock

The Third Reich The Rise and Fall of the Nazis﻿ By M. Whittock : new book

Tracing the history of the Third Reich from the end of World War I﻿  and the Treaty of Versailles, Whittock gives not just the account of the men who rose to the fore in the dangerous days of the Weimar republic, circling around the cult of personality generated by Adolf Hitler, but also a convincing overview of how ordinary Germans became seduced by the dreams of a new world order, the Third Reich.

This book also gives a fascinating insight into the everyday life in Germany during the Second World War and explores key questions such as how much did the Germans know about the Holocaust and why did the regime eventually fail so disastrously?﻿