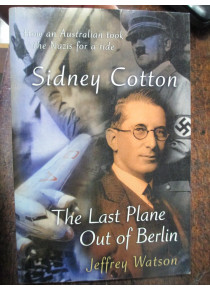 Sidney Cotton was a pilot, a businessman who was decidedly shady - and a spy. He was born in western Queensland in 1896, educated at Southport on the Gold Coast and even as a boy designed cars and planes.

Cotton learnt to fly with the Royal Naval Air Service(RNAS) in WWI.

After the war, he pioneered air mail and aerial survey work in Newfoundland, undertook a two-month air search for two missing Atlantic flyers, and organised an expedition to rescue Augustine Courtauld who was stranded on the Greenland icecap.   He later went into business in the UK (aviation and photography) - and always operated very close to the edge of the law. Various businesses went broke under him - but he always walked away. There were also suggestions that he was involved in society blackmail in London the '1930s. matters', and was  recruited by MI6.

Pre war WW2, he had extensive business contacts in Germany, and frequently used these trips for aerial photography and pre-war reconnaissance flights for the British Intelligence Services to gather information on military targets in Germany, Italy and the Middle East.

During the early times of the war he was promoted to Squadron Leader and headed the development of the newly formed P.D.U. (Photographic Development Unit) of the  Royal Air Force - "Cotton's Club" or the less flattering "Cotton's Crooks" .

Later in the war he fell out with the RAF and the British Government's security establishment - but he will always be remembered as the man who flew the last civilian plane out of Berlin before the declaration of war.

His business life remained varied but highly adventurous. He had dealings with the Arab oil rich families. In 1948, he made a lot of money flying a blockade imposed on the State of Hyderabad in India.

In 1969, Ralph Barker, wrote his biography titled, Aviator Extraordinary : The Sidney Cotton Story. The book for sale here, was written by Jeffery Watson who based his book on Aviator Extraordinary and recollections of family members, still living associates and Ralph Barker. Jeffery Watson an Australian aviation enthusist and TV compare had previously made a documentary of the same name, Last Plane Out of Berlin.