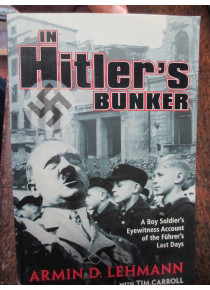 In Hitler's Bunker by L Lehmann

In Hitler's Bunker by L Lehmann

In Hitler's Bunker by L Lehmann﻿. The author was a boy soldier of the Hitler Youth. Armin Lehmann would have given his life for his leader, Adolf Hitler. An estimated 30,000 German teenagers did so defending their beloved Fuhrer during the defence of Berlin.

Lehmann was not to be sacrificed in the street fighting taking place throughout Berlin, instead he found himself at the German high command's bunker complex. It was a stroke of fate that brought him into the company of the most notorious Nazis of Hitler's Third Reich, including Martin Bormann, Goebbels and of course the Hitler himself.

When Hitler greeted Armin Lehmann he knew he had been granted a unique part in world history.
This is the story of those last days from his perspective.﻿