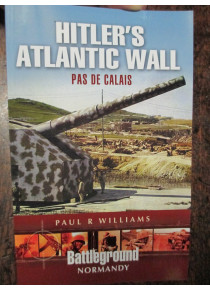 Hitler's Atlantic Wall Pas De Calais﻿ joins over 100 previously published titles in the acclaimed battleground series these well-written and highly illustrated guide books not only bring the battlefields alive for visitors but also inform researchers, family history enthusiasts of the exact details of the battle.﻿

This particular book defines the area of the French Atlantic Coast known as Pas de Calais which is just north of the famous Normandy landings.﻿ The area studied﻿ is from Le Havre north to the Belgian border taking in the important French towns of Diepe Boulogne and Calais.﻿

The book deals with the defenses that Hitler constructed along the coast and also the military units defending this area.﻿