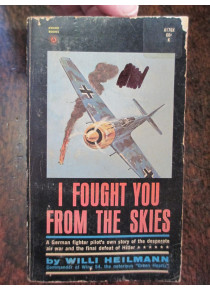 I fought You From the Skies Willi Heilmann

I Fought You from the Skies - a German Fighter Pilot's Story by W. Heilmann - used book

Written as the Luftwaffe began losing the War. Heilman's tale describes untried pilots being thrown into the fray as the Reich collapses and his days not only flying his beloved FW-190 but transitioning to the Fw-190D, defending the Me262s from marauding Allied pilots.

Willi Heilmann's was Commander of Wing 54 known as the "Green Hearts".