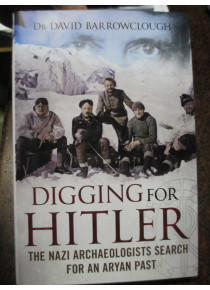 DIGGING FOR HITLER The Nazi Archaeologists Indiana Jones based

Interesting book, studies the attempts by the Nazis to Vilify the existence of the supreme Aryan race.

Much of this work was carried out by Himmler throughout the reign of Adolf Hitler and the Third Reich. Expeditions was sent to Iceland, Tibet, Kafiristan, North Africa, Russia, the Far East, Egypt and even South America and the Arctic.

Digging for Hitler is equipping journey into the warped minds within the Third Reich, stretching from the mythical lost world of Atlantis to the mountains of Tibet.