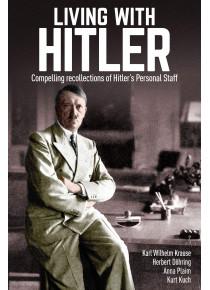 This collection paints a picture of Hitler from members of his household in the unique position of being “seemingly ever present, yet totally unconnected to events.”

Compelling recollections from Hitler’s Bodyguard
Karl Krause (1934-39), his house administrator Herbert Döhring (1935-43) and chambermaid Anna Plaim (1941-43). From these accounts we get a deeper sense of Hitler in close proximity.

These accounts massively add to our understanding of Hitler as a three dimensional character, especially from subjects like Plaim who only knew Hitler’s home life, having rarely left Berghof.

The authors shed light on his likes and dislikes from foods to his hobbies, creating a strange sense of humanity. This collection also provides fresh anecdotes, observations and portraits of Hitler’s entourage and relatives. Plaim’s images of Eva Braun came from finding torn fragments in the bin, whilst Döhring sheds light on Martin Bormann’s demeanour.