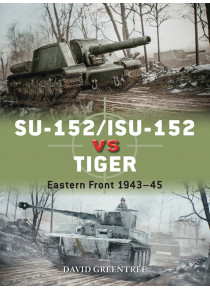 On the Eastern Front in 1943, the Tiger-equipped heavy Panzer battalions gave German armoured divisions an unmatched capability that cost the Red Army dearly. The Tiger's 88mm gun had the potential to carve through Soviet defences in the attack and cause havoc amongst advancing Soviet armoured formations when used in defence.

Neither of the Red Army's heavy tanks (the KV-1 and KV-2) could match the Tiger's gun, and, more importantly, penetrate its armour at anything approaching standard combat range. The Soviet response was a stopgap Tiger-killing vehicle that mounted a 152mm artillery piece onto the KV tank's chassis: the SU-152.