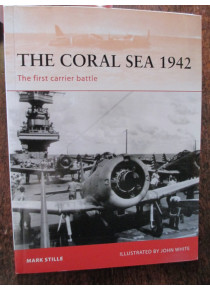 In May of 1942, the Japanese Navy were going to attack Port Moresby, the last Allied base between Australia and Japan. However, the Allied Forces were warned of the advance and the United States sent two aircraft carriers to protect Port Moresby. The Battle of Coral Sea was one of the most important of the Pacifiic War. During the ensuing battle, one American carrier was destroyed and the other severely damaged. The Japanese Navy also lost a carrier, but then decided to withdraw.

It was the first Battle that stopped the Japanese 6 month advance. Using the latest research and numerous period photographs, retired USN Commander Mark O Stille tells the story of this important and unique battle in the Pacific War.﻿