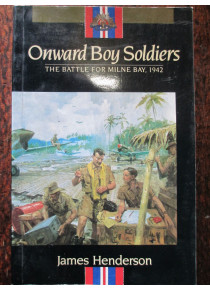 Onward Boy Soldiers ' by James Henderson who was a Australian soldier of the Battle.

Henderson uses recollection from soldiers from both sides to create this history of the Battle Of Milne Bay .This is a well known quality book huge on text content both also lavish with photo maps .

Henderson has gone to extraordinary lengths to capture the blood, the sweat and the tears of the Battle that was crucial to Australia's survival. The fact that he was there is evident on every page.

Covers the whole battle air sea and land forces. If want information on Milne Bay you will not find a better book.

Published by Uni of Western Australia .