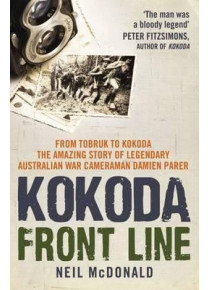 This book is a biography of Damien Parer.

During World War II Damien Parer took the photos that became our history and captured the iconic photographs of the KOKODA track. At the beginning of the war was appointed chief photographer for the Australian Army covering the campaign in Tobruk, Greece, Syria and New Guinea.

The Middle East and North Africa gaining recognition, but it was in New Guinea that so many of his classic images were taken. He made a motion picture documentary titled KOKODA Front Line which went on to be the 1st Australian film to win an Oscar.