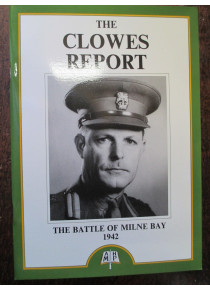 This is a facsimile production book derived from the official report made by Major General Cyril Clowes in 1942. This report﻿ detailed the events that become known as the Battle of Milne Bay. The result of that battle was the first﻿ defeat of the Japanese invasion force in the Pacific war. The RAAF and the Australian Army worked closely together to ensure that famous victory.

The enemy attack at Milne Bay and resulting battle took place between 25th of August and the 7th September 1942.﻿
Although Milne Bay was a victory against the invading Japanese forces, General Blamey seen inadequacies in the command of the battle. He ordered that﻿ Major General Cyril Clowes﻿ be replaced﻿. Clowes returned to Australia in 1943 and held various postings until the end of the war.﻿

Like Blamey,﻿ Major General Cyril Clowes was an old AIF veteran of the landing at Gallipoli and had fought with distinction on the Western front.﻿
﻿

This original report of the battle also includes, casualty figures, units involved in the battle, various letter reports by sub commanders and is supported by many photo illustrations.﻿

No doubt this book would be valuable research to all that have an interest in the New Guinea campaign. Especially, to relatives of those who served in this Battle during Australia's darkest hour.﻿