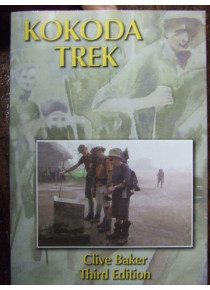 This war book KOKODA TREK is by Clive BAKER who is a highly regarded guide on the Kokoda Trail .

One of the most popular books for undertaking a Kokoda visit - now in its 3rd edition.   Why is it so popular? The author first walked the Kokoda Trail in 1984 and soon began organizing treks to take fellow Australians to the 1942 battlefield. This book was made from 30+ years of experience of walking the Kokoda Track as a tour leader. Many thousands of Australians are now undertaking the Kokoda Pilgrimage each year .

This Kokoda book is a valuable guide, but importantly, also a great start in the planning process to consider the great adventure of visiting the famous Kokoda battlefield. Includes many preparation ideas including, what gear to take, food packs, training, terrain maps, hiring carriers and profiles of the many ridges that are crossed.For many Australians, Kokoda is the iconic battle of World War II, yet few people know the names of the men who fought and died on the track, or even the details of what happened.

More Australians died in the months of fighting in Papua, than in any other campaign of World War II. Kokoda was a defining Battle for Australia, where a small force of young, ill-equipped Australians engaged a highly experienced and hitherto unstoppable Japanese force on a narrow, precarious jungle track. Again and again, the outnumbered Australians risked everything to stop the Japanese from advancing along the track towards mainland Australia. Conditions on the track were hellish - rain was constant, the terrain close to inhospitable, food and ammunition supplies were practically nonexistent and the men constantly battled malaria and dysentery, as well as the Japanese.
Excellent for people considering a trek of the Track, also genealogy family research for orientation of places/conditions  along the sections of track .﻿