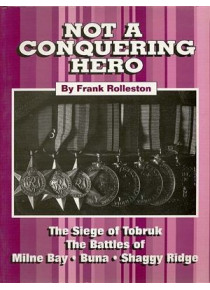 Not a Conquering Hero: The Siege of Tobruk, Battles of Milne Bay, Buna, Shaggy Ridge﻿
by F. Rolleston

2nd World War book ' Not a Conquering Hero: The Siege of Tobruk, Battles of Milne Bay, Buna, Shaggy Ridge' by F Rolleston. The book's author, Frank Rolleston was born in 1915, his parents were cane farmers from Eton, a town near Mackay.

He enlisted in 1941, allotted as reinforcements. With little training, he was shipped to the Middle East in time to join the Rats Of Tobruk during the Siege Of Tobruk. Upon arrival in Tobruk he was allotted to the 2/9th Battalion 18th Brigade (7th Division) which was under siege by
Rommel's Afrika Corps. The author is able to recall vivid first hand accounts,
of the battles around Tobruk. Thus the book is a valuable resource for researching
the 9th Battalion's operations in Tobruk. The Battalion was withdrawn from Tobruk
and sent to Syria where they fought against the vichy French. Due to the Japanese
onslaught the AIF was recalled for the defence of Australia. At that time, Militia
units from Australia formed the only defence on the Kokoda Track in New Guinea.
The 9th Battalion arrived just in time to help repel the Japanese attempted
invasion of Milne Bay. Afterwards taking part in the bloody fighting at Buna.
The author contracted typhus at Buna and was sent back to Australia for treatment.

After recovering from the disease he rejoined his unit and fought in the Battle
for Shaggy Ridge. He was a Bren gunner who saw many of his mates killed or wounded. Frank's own thought was that only an author who was on the front line can accurately describe the events and actions in any war. Accompanying the detailed text are maps and many of the author's own pictures taken during his time on the front line
'Not a Conquering Hero' is a great tribute to the Australian Digger.