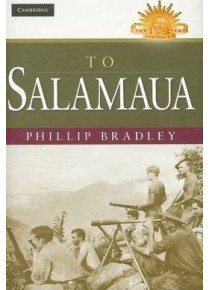 To Salamaua by Philip Bradley

Obtain this Australian WW2 battle book before it goes out of print as this series is highly collectible - price will escalate quickly.﻿

Salamaua Campaign - the first of the New Guinea offensives by the Australian Army in the Second World War. Opening with the pivotal air-sea battle of the Bismarck Sea, this important title recounts the fierce land campaign that was fought for the ridges that guarded the Japanese base at Salamaua. From Mount Tambu to Old Vickers and across the Francisco River, the Australians and their American allies fought a desperate struggle to keep the Imperial Japanese Army diverted from the strategic prize of Lae.

To Salamaua covers the entire campaign in one volume for the first time. From the strategic background of the campaign and the heated conflicts, to the mud and blood of the front lines, this is the extraordinary story.﻿