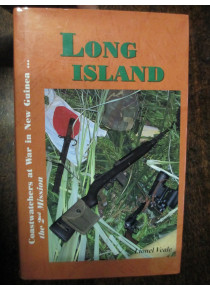 Long Island also called Pono was important to the Australian / Allied WW2 New Guinea operation because of its strategic location. This was the most northerly island used for surveillance as the Allies planned their attacks on Japanese and also to recapture New Britain.

The island's position made it ideal for a Coastwatcher mission, watching the advance of Japanese shipping and troops as well as reporting enemy aircraft as they set out on their air raids against the Allied bases to the south.
To avoid detection by allied radar, Japanese planes with bases at Wewak and Madang used the Straits between New Guinea and New Britain and thus more often than not would overfly Long Island.This story is about the Coastwatcher men who carried out the mission on Long Island. The author was a member of this mission and as such this is an authoritative record of that particular operation.