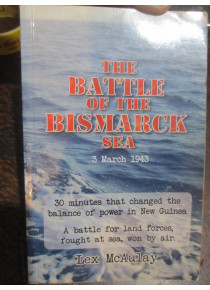 Battle of the Bismarck Sea by L. McAulay

Battle of the Bismarck Sea by L. McAulay

Lex Mc Aulay provides the first account of the destruction of the crucial Japanese reinforcement convoy to Lae on 2-4 March 1943: A joint RAAF and the US 5th Air Force battle against the Japanese. Research included, official records, captured documents, interrogation reports, and the recollections and memoirs of the participants.

Wartime propaganda and mythology are swept aside and for the first time the facts are presented, with detail including the identities of the ships involved, their cargoes, and the fate of those aboard. Appendices include lists of the ships and cargoes; air crew lists; bombing analysis and the air units involved.