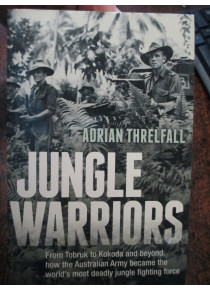 Jungle Warriors Tobruk, Kokoka and Beyond by A.Threlfall

Jungle Warriors examines the extraordinary changes the Australian Army underwent over the course of the Second World War. It explores how the 2nd AIF evolved from fighting European and desert wars, in open country and often with large numbers of troops, to master the very close warfare of jungle combat. It investigates the extraordinary array of changes to weapons, equipment, tactics and training. It also reveals the painful lessons learnt and the inadequate planning that resulted in the unnecessary deaths of so many Australian men.

Following the story from the training camps in Australia on to the battlefields of North Africa and the Mediterranean to Milne Bay, Kokoda, and final victory in Borneo, Bougainville and New Guinea, this is a comprehensive and coherent interrogation of Australia's jungle warfare experience. It also makes significant contribution to our World War II military history. ﻿