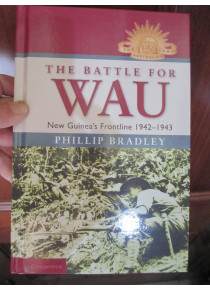 This is the most comprehensive book ever written about the Australian participation at the Battle of Wau. One would imagine, you could add "ever will be written".﻿

The Battle for Wau brings together for the first time the full story of the early World War II conflicts in New Guinea, from the landing of the Japanese at Salamaua in March 1942 to their defeat at Wau in February 1943. Phillip Bradley draws on the recollections of over 70 veterans from the campaign and on his own first-hand knowledge of the region.

Beginning with the early commando operations in Salamaua, the story unfolds with the burning of Wau, the clashes around Mubo, the Japanese convoy to Lae and the United States air operation to Wau. The book climaxes with the fortitude of Captain Sherlock's outnumbered company. Desperately fighting an enemy regiment debouching from the rugged unguarded ranges to the east, the men fought to hold Wau airfield open for the arrival of vital reinforcements.﻿