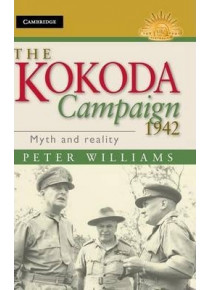 The fighting on the Kokoda Track in World War II is second only to Gallipoli in the Australian national consciousness. The Kokoda campaign of 1942 has taken on mythical status in Australian military history.

According to the legend, Australian soldiers were vastly outnumbered by the Japanese, who suffered great losses in battle and as a result of the harsh conditions of the Kokoda Track.

In this important book, Peter Williams seeks to dispel the Kokoda myth. Using extensive research and Japanese sources, he explains what really happened on the Kokoda Track in 1942. Unlike most other books written from an Australian perspective, The Kokoda Campaign 1942: Myth and reality focuses on the strategies, tactics and battle plans of the Japanese and shows that the Australians were in fact rarely outnumbered. For the first time, this book combines narrative with careful analysis to present an undistorted picture of the events of the campaign.