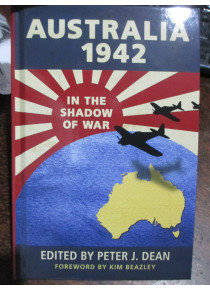 Australia 1942 In the Shadow of War

Australia 1942 In the Shadow of War by P Dean

In 1942, the shadow of modern war reached Australia's shores for the first time. In this compelling volume, leading historians explore why 1942 was such a pivotal year in Australia's history and explain how the nation confronted some of its greatest challenges.

This broad ranging study covers key issues from political, economic and home front reform to the establishment of a new partnership with the United States; the role of the Air Force and the Navy; the bombing of Darwin; as well as the battles of Kokoda, Milne Bay, the Beachheads and Guadalcanal. Australia 1942 provides a unique and in-depth exploration of the controversy surrounding the potential for invasion.

Japanese and Australian historians offer perspectives on Japanese military intentions and strategies towards Australia and the South Pacific. Generously illustrated, it is essential reading for anyone interested in one of Australia's most decisive and critical years.