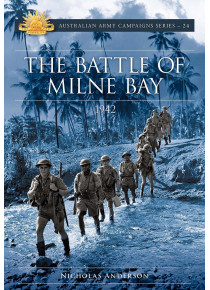 The Battle of Milne Bay 1942 by N Anderson

By 1942 the formidable Japanese military had conquered swathes of territory across south-east Asia and the Pacific Ocean. Despite its defeat at the Battle of Midway, Japan remained a potent enemy committed to the creation of a defensive arc to shield its captured possessions in the Pacific.

The capture of Port Moresby would cement the southern border of this defensive arc and sever the vital lines of communication between Australia and the United States. It was the Japanese plan to seize Moresby that would set the course for the Battle of Milne Bay.

Situated on the eastern tip of New Guinea, Milne Bay was a wretched hell-hole: swamp-riddled, a haven for malaria and cursed with torrential rain. It was here that General Douglas MacArthur ordered the secret construction of an Allied base with airfields to protect the maritime approach to Port Moresby.

But the Japanese soon discovered the base at Milne Bay and despatched a task force to destroy its garrison and occupy the base. All that stood between the Japanese and their prize was a brigade of regular Australian soldiers untrained in tropical warfare and a brigade of Australian militia with no combat experience whatsoever.

While the Kokoda campaign is etched in public memory, its sister battle at Milne Bay has long been neglected. However the bitter fighting over this isolated harbour played an equally important role in protecting Port Moresby and made a valuable contribution to shifting Allied fortunes in the Pacific War.