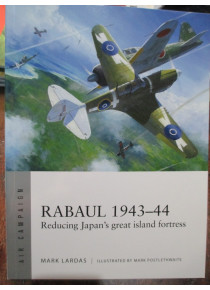 In 1942, the massive Japanese naval base and airfield at Rabaul was a fortress standing in the Allies ' path to Tokyo. It was impossible to seize Rabaul, or starve the 100,000-strong garrison out. Instead the US began an innovative, hard-fought two-year air campaign to draw its teeth, and allow them to bypass the island completely.

The struggle decided more than the fate of Rabaul. If successful, the Allies would demonstrate a new form of warfare, where air power, with a judicious use of naval and land forces, would eliminate the need to occupy a ground objective in order to control it. As it turned out, the Siege of Rabaul proved to be more just than a successful demonstration of air power it provided the roadmap for the rest of World War II in the Pacific. ﻿