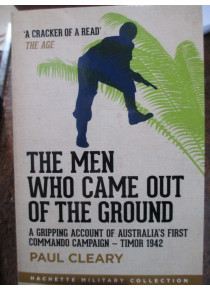 The gripping story of a small force of Australian Special Forces commandos that launched relentless hit and run raids on far superior Japanese forces in East Timor for most of 1942.

It was early 1942, Australia was in dire straits. The seemingly all-conquering Japanese military forces had rolled over south-east Asia. Singapore had Fallen. Only a few hundred men remained in Timor. These soldiers, the 2/2 Australian Independent Company - Sparrow Force - were all that stood between Japanese forces and Papua New Guinea.

A Special Forces unit set up to fight a different kind of war, many were bushmen and crack shots, and all were trained to fight behind enemy lines. Mobilising the support of the locals, they adapted their bush skills to become the masters of this new kind of commando warfare. Always greatly outnumbered but relentless in their harassing campaign of skirmishes and ambushes, Sparrow Force tied down thousands of Japanese in a fierce guerrilla war - not just matching them but beating them. The Timor campaign became a defining moment Australia's military history. ﻿