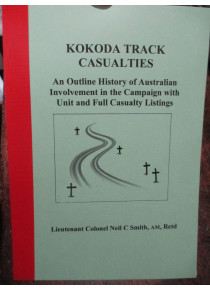 Kokoda Track Casualties﻿ Roll of Australians who were wounded or died during the 1942 campaign. Importantly the booklet also lists the Australian Units which took part in the Battle.
These booklets are sought after by Family Historians, Medal Collectors and researchers.

2022 will mark the 80th Anniversary of the Battle that saved Australia.