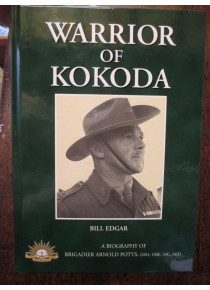 Warrior of Kokoda by B. Edgar - new revised book

This war book is the story of Brigadier Arnold Potts, a Great War and World War Two hero, a country farmer from Western Australia who led the Australian 21st Infantry Brigade in crucial engagements against Japanese forces in Papua in 1942.

He organised and inspired his outnumbered and out-gunned brigade, together with the remnants of ‘Maroubra Force’, to conduct a three-week-long fighting withdrawal back along the Kokoda Track. The Japanese force was eventually fought to a standstill along the ridges overlooking Port Moresby. Of all the men connected with the defence of Kokoda he is the one credited with the planning and command of the soldiers that saved Australia - for which the nation thanks him for being there!

At that time however, instead of receiving the accolades of his superiors and the thanks of a nation, Potts was ignominiously removed from his command and sent to the 23rd Brigade at Adelaide River, south of Darwin.

Many veterans of the Kokoda campaign regard Potts' dismissal as a disgrace, an attempt to cover up the inadequacies of the Allied High Commanders, MacArthur and Blamey. Others, however, think he was transferred for legitimate military reasons. The controversy remains.  Chicanery and heroism went hand-in-hand during Australia's darkest hour in 1942.
This book is highly recommended to all people considering a visit to Kokoda. I guarantee that it will enlighten the reader to the situation that prevailed on the Kokoda Trail during WW2.
Kokoda is a proud history for all Australians - don't go to Kokoda without knowing the glory of those who valiantly fought .