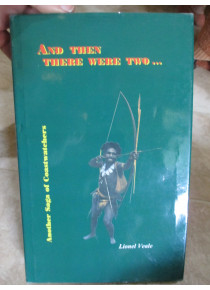 Coast Watchers at War in New Guinea And Then Veale Book

And Then There Were Two... Another Saga Of Coastwatchers Lionel Veale

And Then There Were Two... Another Saga Of Coastwatchers Lionel Veale

Lionel Veale﻿ was a courageous Australian Coastwatcher during World War II.﻿ Sergeant Lionel Veale, 2nd / 1st Independent Company, Commando served as a coastwatcher for six missions in New Guinea between 1942 and 1945. One of these missions is recorded in detail in Lionel's first book,  Wewak Mission which he self published in 1996.

He was awarded an MID - mentioned in dispatch in 1945 for his outstanding contribution to Allied intelligence during Australia's darkest days.﻿

This is a "non fiction" novel based on the experiences of the author during his many missions as the commando in New Guinea. This book covers the period of the Japanese invasion of New Guinea. A scarce book to obtain that rings with authenticity of long-lost memories of the struggle for Australia.﻿