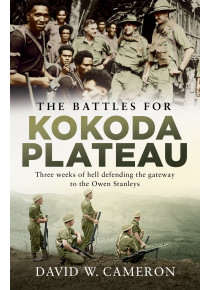 The Battles for Kokoda Plateau Book by David Cameron

The Battles for Kokoda Plateau by D W Cameron

The Battles for Kokoda Plateau

Three weeks of hell defending the gateway to the Owen Stanleys

A new book about Australia's WW2 Kokoda Campaign. Focusing on the critical first weeks of fighting to halt the Japanese advance across Papua New Guinea to Port Moresby.

Using letters, diaries and other first-hand accounts, from friend and foe alike, leading Australian military historian David W Cameron, has for the first time written a detailed, compelling and provocative account of what occurred at the northern foot of the Owen Stanleys in late July and early August 1942.

These are stories that deserve to be firmly embedded into the Kokoda legend.