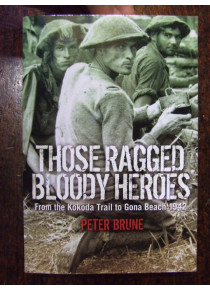 History of the Battles of KOKODA GONA MILNE BAY 1942

This military book is written by an Australian about the Australians who fought along  Kokoda Trail and Gona Campaigns.
During July to September 1942 the Japanese set about the capture of Port Moresby by an overland crossing of the Owen Stanley Range, and a landing in Milne Bay. To oppose a force of 10,000 crack Japanese troops on the Kokoda Trail, the Allies committed one under-trained and poorly-equipped unit - the 39th Battalion, later reinforced by Veterans of the 21st Brigade, 7th Division AIF. These were then men of Maroubra Force.
The Australians put up a desperate fight. They withdrew village by village, forcing the Japanese to fight for every inch of ground. Finally at Ioribaiwa, the Japanese turned away, beaten and exhausted. The Australian soldiers' reward for their remarkable achievement was denigration by the High Command - General Blamey called them 'running rabbits'.
Then in December 1942 when the fighting at the beachheads had produced little success, the former members of Maroubra Force captured Gona after heavy fighting - but at tragic cost.
Those Ragged Bloody Heroes is the story of those battles told as never before, through the eyes of the Australian soldiers who fought there. It is a story that raises serious questions about the planning and command of the Kokoda and Gona campaigns.
Those Ragged Bloody Heroes is a stirring history of triumph, tragedy and controversy set in the mud and steaming jungle of the Kokoda Trail and the fireswept beaches at Gona.﻿