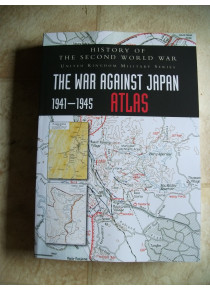 THE OFFICIAL HISTORY OF THE WAR AGAINST JAPAN 1941-45 ATLAS

Although part of the British Official History of Second World War Volumes. This Atlas is full of WW2 Military Operational & Period Commercial maps which are invaluable to the researcher of World War Two.  The maps which cover the Pacific, Burma, Japan and Indian areas are extracted from the UK Official History Volumes to form this Atlas. The Australians are well covered in the Singapore Malaya maps.