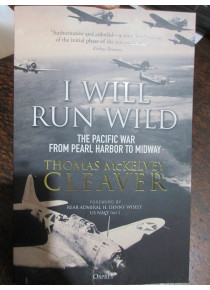 $26.00
I Will Run Wild The Pacific War from Pearl Harbor to Midway By: T Mc Cleaver

The book covers the Japanese Offensive between Pearl Harbor (December 1941) and April 1942. Also the Allied response at the Battle of Coral Sea and Midway.

I Will Run Wild draws on extensive first-hand accounts and fascinating new analysis to tell the story of Americans, British, Dutch, Australians and New Zealanders taken by surprise from Pearl Harbor to Singapore that first Sunday of December 1941, who went on to fight with what they had at hand against a stronger and better-prepared foe, and in so doing built the basis for a reversal of fortune and an eventual victory.