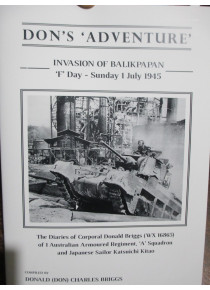 The Diary of Corporal Briggs 1 Australian Armoured Regiment. Briggs started his diary on the day of the Balikpapan and concludes on the 21 November 1945.

Provides vivid accounts of the landing. The amphibious assault on Balikpapan which was not only the last large scale Allied operation of World War II but remains Australia's largest ever amphibious assault. As the culmination of the RAN's participation in over 20 South West Pacific amphibious landings during World War II, the Balikpapan invasion demonstrated the high level of expertise in amphibious operations that had been achieved, as well as the degree to which joint and combined operations had developed during almost six years of war.