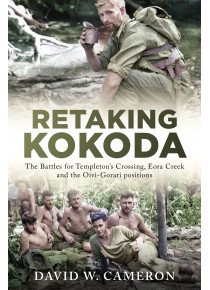 Japanese Major General Horii Tomitarô, commanding the South Seas Force, had the Australians on the back foot. Australia was holding the last defendable ridge in the Owen Stanley ranges, Imita Ridge. Horii to his distress was then given orders from Imperial Headquarters in Tokyo that he was to fall back across the mountains to the Japanese beachheads at Gona, Sanananda, and Buna, leaving a force between Templeton’s Crossing and Eora Creek to stop any Australian advance through the mountains. The Japanese, unknown to the Australians evacuated Ioribaiwa Ridge just before they launched their attacks and to their amazement on storming the heights, the Australians encountered no resistance – the Japanese had gone.

This, however, did not mean the fighting on the Kokoda Track was over, far from it. Three more desperate actions would be fought by the Australians and Japanese, before the decisive battles for the Japanese beachheads could be decided – the battles for Templeton’s Crossing, Eora Creek, and finally the Oivi-Gorari positions on the northern lowland plains. Just 15-kilometres east lay the Kumusi River, the last geographical barrier before reaching the strongly fortified Japanese beachheads themselves.