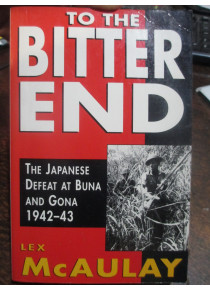 To The Bitter End The Japanese Defeat at Buna And Gona 1942-43' by Lex McAulay. McAulay recalls the history of a US and Australian combined campaign for the battle of Buna and Gona . All Australians have heard of Kokoda - but the battles of Buna and Gona were equally as bloody and important. A distinguished work for detail - 327 pages 100% Buna Gona guaranteed.