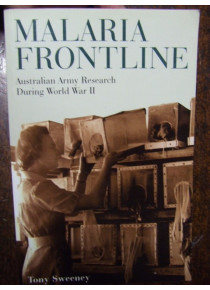 During World War II the hidden killer, malaria, was one of the most powerful enemies of Australian troops in the south-west Pacific. In June 1943 the Australian Army formed a special research team, the Land Headquarters Medical Research Unit to tackle the problem of malarial infection. This meticulously documented book the Australian search to find a cure for malaria and the scientific breakthroughs.﻿
Also has a Nominal Roll of the Volunteers the ' guinea pigs '