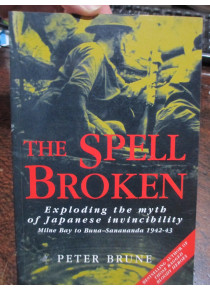 Account of 1942-43 battles at Milne Bay, Buna and Sanananda (Papua New Guinea) told through records of those campaigns and the recollections of their survivors .﻿

The title alludes to the fact that before Milne Bay there was a myth that the Japanese had complete invincibility over the Allied forces on the ground.

A highly detailed book which is somewhat scarce.﻿﻿