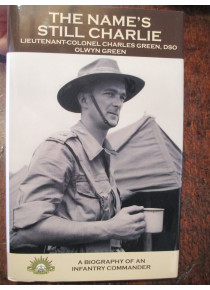 Charles Hercules Green was from Swan Creek near Grafton NSW. He had joined the Australian Army at age 16 years in 1936.

He fought with distinction during WW2 from the early North Africa campaigns - Bardia,Tobruk, Greece, and Syria.﻿ Later, returning to Australia to command the 2nd 11th Battalion - at age 25 years he was the youngest Australian battalion commander during the war. For his service in Wewak New Guinea he was awarded the Distinguished Service Order - DSO Medal.
He was a popular Commander amongst his men and was given the nickname 'Chuckles'. On 27 September 1950, Green and the 3RAR embarked from Kure, Japan, and arrived at Pusan Korea the following morning. Green led the Battalion with distinction through the battles at Yongju, Kujin, and Chongju.

On 30 October 1950, the day after the Battle of Chongju, Green was resting in his tent when Chinese/North Korean artillery shells exploded nearby. It happened that Green was the only one wounded from the Battalion during the attack.
His shrapnel wounds were too severe, he made it to a MASH unit but died from his wounds on the 1st November 1950.
He was buried in the United Nations Memorial Cemetery in Busan, South Korea, and posthumously awarded the US Silver Star in 1951.
He was only 30 years old when he died - his Army service spanned two of the major wars of the 20th century. His life was remembered by his wife Olwyn, who wrote this book a biography of him titled The Name's Still Charlie.