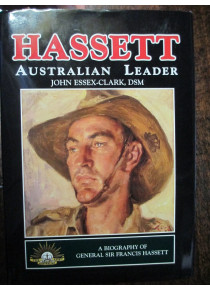 Biography of General Sir Francis George "Frank" Hassett AC, KBE, CB, DSO, LVO. ﻿
Joining the Australian Army in 1935 he was a graduate of Duntroon.
He served with distinction during the early stages of World War II
During which time he was promoted to Captain and adjutant with the 2nd 3rd Battalion. He took part in the attacks on Bardia and the capture of Tobruk. With the advent of the Japanese entry to the war he was recalled and appointed as a staff officer in New Guinea. By the end of the war he was Chief to Staff of the 3rd Division which was combating Japanese forces on the Island of Bougainville﻿.
After the war, he remained in the Army as an instructor.

In June 1951, Hassett was sent to Korea to assume the command of the 3rd Battalion RAR Royal Australian Regiment. He led the Battalion through some of the toughest fighting of the Korean War. He and the 3rd Royal Australian Regiment was tasked to capture Hill 317 better known as Maryang San. He was awarded the Distinguished Service Order Medal for his leadership during this battle.﻿