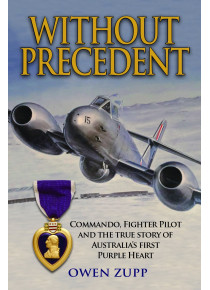 Without Precedent By O. Zupp

After the war he had an extensive civil career spanning international routes with QANTAS, cloud-seeding and air ambulance operations﻿ - what an incredible life !

Written by his son, Owen Zupp from personal memoirs, official records this is a larger book﻿ of 368 pages supported with 112 photos﻿.
Would be of immense interest to RAAF enthusists especially with connection around the Korean War period both in Australia and the war front.