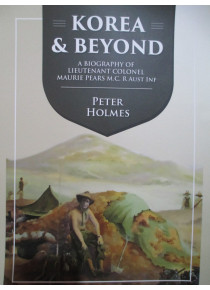 General Sir Francis George "Frank" Hassett AC, KBE, CB, DSO, LVO commander 3rd Battalion Royal Australian Regiment Korean War was once asked what single moment in his military career was most memorable and moving. He replied: "amongst many poignant moments throughout my career, one incident in Korea stands out, and I have never told anyone this before.
As you know the D Company assault had stalled after a tough fight. I was watching the fight with Jack Gerke of C Company, who had young Lieutenant Maurice Pears, a recent graduate from Duntroon, with him. I had just briefed them to continue the assault through D Company onto 'Baldy' then to follow through on to Maryang San and hold it. Pears now seeing the pandemonium of shot and shell on the ridge, was to lead his platoon to spearhead the attack. I looked at young Maurie and his eyes flicked to mine. We made intense eye contact and I was moved by those clear steady eyes. I asked,' Maurie, can you do it?' He replied while maintaining unblinking eye contact,' Yes Sir we can.."﻿

Maurie Pears﻿ military career began near the end of World War II when he was a Lieutenant of the Cadets at Sydney Boys High School Cadet Corps.

He entered Duntroon Military College 1947, graduated and immediately went to Korea. During the Korean War he was twice wounded, distinguishing himself as a leader and was awarded the Military Cross. Maurie's 7th Platoon 3 RAR was instrumental in capturing the peak of Hill 317 (Maryang San)﻿.﻿ After the war, he remained with the Australian Army in various appointments within Australia and New Guinea. In 1966, he was appointed Commanding Officer the Corps of Staff Cadets Duntroon. Later becoming the Commander of 1 PIR﻿ (Pacific Islands Regiment).

The detailed narrative of 200 pages (large A4 format) is supported by 21 pages of plates : illustrations, facsimiles, maps, ﻿personal photographs, bibliographical references and index.