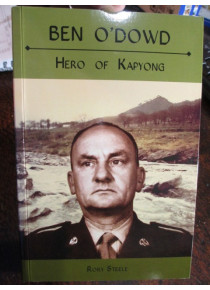 In their most important engagement in the Korean War, Australian troops were cut off from other battalions and surrounded by units of China's People's Liberation Army. Earlier, as members of a United Nations force responding to the invasion of South Korea by the North, they had fought their way up the peninsula. China then intervened and turned the tide with a series of massive offensives; in late April its forces were poised to break through the UN line and descend on the South Korean capital.

Defending a hillside above the Kapyong Valley four hundred men of the Third Battalion, Royal Australian Regiment, confronted a determined enemy ten times their number who came at them in wave after wave.

Fighting went on for a night and the following day until the order came to the senior officer on the ground to withdraw. Major Ben O'Dowd led the four rifle companies under fire to safety without suffering a single loss. His heroism was never properly recognised. The Chinese onslaught was checked at Kapyong and the war went into stalemate.﻿