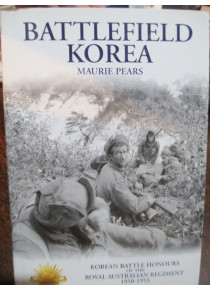 Documents the heroism of the Australian soldier from the Yalu to Pusan and back including the history of the Battles of Kapyong, Kowang San, Maryang San and Samichon.

Lists the gallantry awards medals earned by the members of RAR 1950-53. Australian Imperial and American award medal recipients are included as are those Mentioned in Dispatches and the citations give a remarkable battlefield authenticity. ﻿