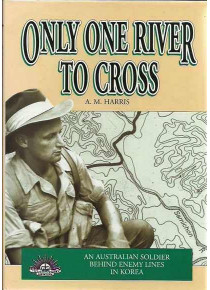 History Digger with the 3 RAR in Korean War

Only One River to Cross by A. Harris - New book

The Author Dr Harris tells the story of his early years on the Buronga Ridge near Mildura, of his army service with the BCOF occupation force in Japan and explores the exhilarating pursuit of the retreating North Koreans.

His service with 3RAR ended on the day he was wounded and his commanding officer was killed. Competent in Japanese and Chinese, Harris returned to Korea in 1953 and was placed in command of a Special Agent Detachment, whose task was the infiltration of intelligence agents into enemy territory.

Harris and his agents made ten successful penetrations and it was planned that they take part in the rescue of British Lieutenant-Colonel Carne, VC, DSO, who was a prisoner of war. Harris was wounded on his last mission. The rescue attempt, not that the route through the enemy lines was threatened, was abandoned.

Thirty years after the aborted rescue, Harris was visiting Gloucester Cathedral, where he found a small wooden cross carved in prison, by Carne, to honour his chaplain who died in captivity.

Reading this intensely personal, riveting account of one man's war, the reader realises that war is indeed unreasonable. The men who live through it, however, come away with a profound understanding of the meaning of such conflicts and why men are prepared to died for each other.